We decided that we wanted to make Audrey's baby food rather than buying it at the store. It's a personal choice and it does take more effort, but it is cost effective and it is very gratifying after making it and knowing that she will probably enjoy it.  Obviously this is the first time we have attempted to make her any food, and surprisingly it's not that easy.  I am such a better baker than a cook, so it may take a few tries before we get it right.  We planned on starting out with avocados since Audrey's Great Auntie Janis brought some back with her from the Grandparents avocado farm, but they are not ripe just yet and I am too impatient to wait, so we decided carrots would be first.  My friend Melinda was sweet enough to get us a steamer basket from Now We're Cooking (I couldn't find one ANYWHERE!) and I figured the blender would be a great thing to use to puree them.  I don't think I cooked them long enough because after I stuck them in the blender they just sort of mixed and then settled into the bottom and still had some tiny bits of carrots in them.  They weren't big chunks and I didn't know what the consistency should look like.  After adding water, pulsing, whipping, pureeing, etc...it was still slightly lumpy.  I figured she could handle it so I pulled as much out of the blender as I could. She looked excited to eat it, but after slightly choking and a mini mom heart attack later we gave up and decided to try again the next day.  After going to Walmart, Target, and then finally Bed Bath and Beyond we decided to buy a Cuisinart blender thing that actually says you can make baby food with it and it is BPA free.  Hopefully after steaming the carrots a bit longer....like mashed consistency and using this new fancy appliance we can get it right and Audrey can enjoy the new world of solids!!  Wish us luck!

From the start we talked about getting Audrey's ears pierced when she got a little bigger.  At first Elijah was anti-ear piercing (why torture and make our baby cry when we don't have to) and told me I would have to take her myself...but after many people saying, "Oh what a cute boy you have," he caved in.  We decided to wait until after her second round of shots, so 2 weeks after that we bit the bullet and headed to the mall.  Here she is at 19 weeks old heading into the Icing with big grins, not knowing what is in store for her.  The girl who pierced her ears was very nice and Audrey seemed to like her.  They had to do one ear at a time and Daddy got the fun task of holding her head and arm still while she got blinged out.  Poor thing...she didn't want to have anything to do with the 2nd ear being done.  I teared up...what mom wouldn't and many spectators watched as our little baby became a big girl with blinged out ears!  Audrey was a trooper and only cried for a few minutes!  I must say that she does look super cute with her pretty little earrings!! So glad we did it!

New Year's Eve was also enjoyable...as we stayed home and just spent the day together with the 4-legged babies.  It's hard going anywhere when there are fireworks involved because our big marshmallow dog, Zane, is deathly afraid of them.  He will jump into my lap like a tiny little poodle and proceed to shake and will not stop until the fireworks subside....so going anywhere during these times is nearly impossible.  We hung out and watched some of the countdown shows while Audrey played on her activity mat.  I thought it would be a great idea to give her a taste of a candy cane.   Bad idea!!  11:30 rolls around and she is totally wired, laying in her  bassinet talking up a storm and flailing her arms and legs.  She is never up this late and I don't know if she knew it was New Year's Eve or it was the candy cane, but boy was she crazy!!  She finally fell asleep after Elijah held her arms still and we crawled into bed to watch the ball drop.  Elijah was pretty much asleep as it was happening and I had to put the television on sleep mode because my eyes were rolling into the back of my head.  Thankfully Zane slept through the fireworks and didn't need Mommy to console his shivering body! New Year's Day was spent running errands and cleaning up the house.  Audrey also wore one of her novelty shirts...I see a trend going with this as I have already bought her a "Baby's First Valentine's" outfit!!  Here she is standing (which is something new that she LOVES to do) in her New Year's gear!!  Hopefully 2011 will bring us as much joy as 2010  did!! 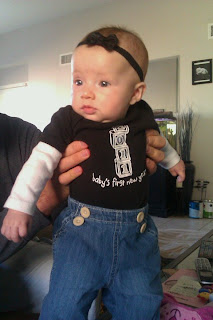 Posted by Cavinder Family at 7:56 PM No comments:

Christmas was extra special this year since we got to enjoy it with our new little love!!  Elijah and I decided that we were not going to get gifts for each other since we can buy what we want whenever...we made it all about Audrey (plus it was a lot less stressful)!  We were so excited to get Audrey all dressed up for Christmas.  I have this thing..being a new mom and all...that she has to have a novelty outfit for each of the big holidays.  We got her a "Baby's First Christmas" outfit and dolled her up in it for the festivities.  Her Grandpa came over early and played the Wii with Elijah while I worked on making our Mexican feast.  Her Grandma Mary stopped by to say hello and then later on her Uncle Jeff and Auntie Tam came over to open gifts and eat.  It was a long wait for presents, but a 4 month doesn't really have the concept of time.  I was more anxious to open up her gifts!! Her Nana and Grandma had sent her a box a couple of weeks before and it was all we could do not to open it!!  Audrey totally came out ahead and pretty much got a nice new start to her growing wardrobe in larger sizes, Santa brought her a Baby Einstein Exersaucer, and she got many learning toys!!  Audrey was so blessed to have a nice Christmas with her close family! 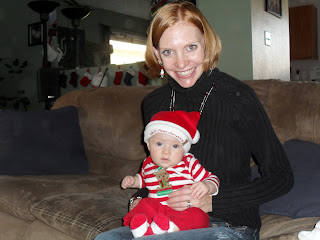 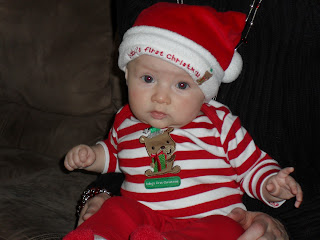 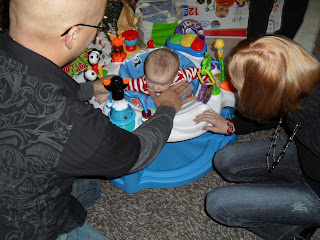 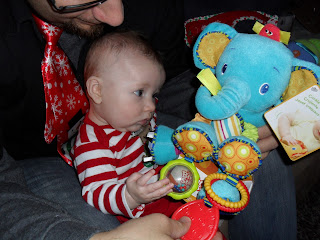 Posted by Cavinder Family at 7:55 PM No comments: 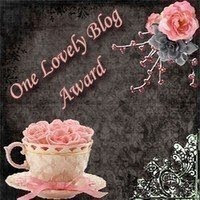 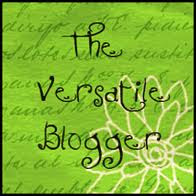